The diplomatic relations between the Republic of Belarus and Ireland were established on 27 March 1992.

On 7 – 9 July 2013, Deputy Minister of Foreign Affairs Alena Kupchyna paid a working visit to Ireland. During the visit A.Kupchyna had a meeting with Lucinda Creighton MP, Minister of State for European Affairs, Ministry of Foreign Affairs and Trade of Ireland, and consultations between the Foreign Ministries of Belarus and Ireland were held.

On 30 May 2016, during his working visit to Ireland Ambassador S.Aleinik met with Minister for Foreign Affairs and Trade of Ireland Charles Flanagan.

On 17 April 2017, the Foreign Ministers of the two countries exchanged protocol messages on the occasion of the 25th anniversary of the establishment of diplomatic relations between Belarus and Ireland.

On 26 April 2017, during his working visit to Ireland Ambassador S.Aleinik met with Minister of Foreign Affairs and Trade of Ireland C.Flanagan. In particular, cooperation in the humanitarian sphere, significant for the parties, was discussed. It had a special symbolism in the light of the International Chernobyl Disaster Remembrance Day observed for the first time on that date. The Remembrance Day was established in line with the UN General Assembly resolution 71/125 of 8 December 2016, with Ireland playing a special role in its adoption.

On 27 April 2017, Ambassador S.Aleinik met with Speaker of the House of Representatives of the Parliament of Ireland Seán Ó Fearghaíl.

On 21 September 2017, in the margins of the 72nd session of the UN General Assembly Minister of Foreign Affairs of the Republic of Belarus Vladimir Makei met with Minister of Foreign Affairs and Trade of Ireland Simon Coveney. Among the issues discussed by the Ministers were intensification of trade and economic relations, Belarus – EU cooperation and interaction between the two countries within international organizations. Special attention was paid to the implementation of Irish investment projects in Belarus. V.Makei expressed gratitude for Ireland’s important role in the support of Belarus in overcoming the consequences of the Chernobyl nuclear accident.

In October 2018, the Ministers met in Luxembourg at the ninth annual Eastern Partnership Foreign Ministers Meeting. V.Makei and S.Coveney discussed ways to expand Belarusian-Irish political, trade and economic relations, cooperation between Belarus and the European Union, as well as contacts within the framework of international organizations. V.Makei underlined the extensive support Ireland offered Belarus in mitigating the consequences of the Chernobyl disaster. The parties reaffirmed commitment to facilitating contacts between the business communities of the two countries. In September 2019, the Ministers met at the 74th session of the UN General Assembly. 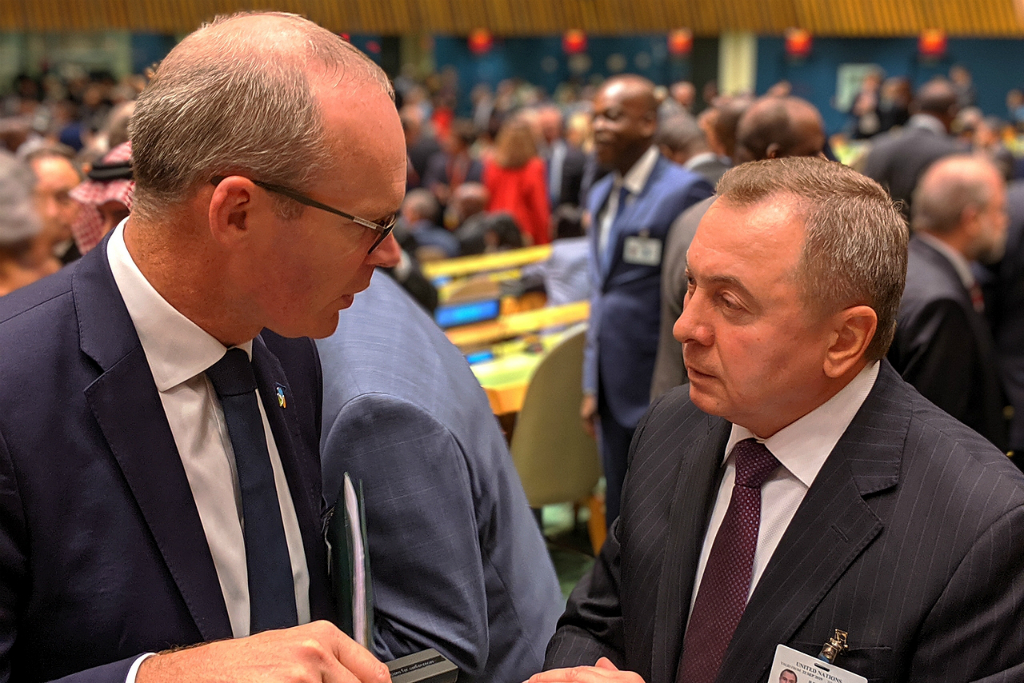 On 20 May 2020, V.Makei had a telephone conversation with S.Coveney. The Ministers stressed the importance of joint efforts in combating the spread of coronavirus infection. V.Makei thanked the Irish charities that continued to support Belarus through Chernobyl cooperation, paying special attention to the protection of the most vulnerable people from Covid-19. Interlocutors expressed satisfaction with the positive dynamics of bilateral trade and economic cooperation in 2019 and discussed the ways of its fostering in the future.