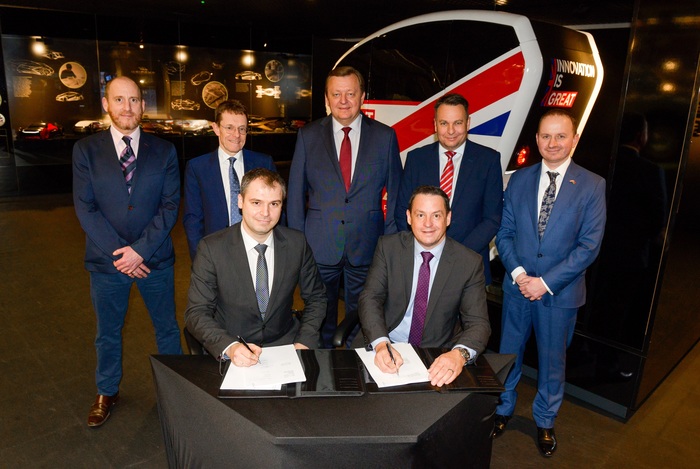 A Coventry automotive design and manufacturing company has set up a new joint venture agreement with a leading electric vehicle manufacturer from Belarus which will create 600 new jobs by establishing a zero-emissions manufacturing plant in the UK.

CAD CAM Automotive (CCA) in Holbrook Lane met representatives from electric vehicle manufacturer BKM Holding, based in Minsk, at the Zero Emission Vehicle Summit in Birmingham in 2018, which was opened by Andy Street, Mayor of the West Midlands.

CCA and BKM Holding – which have a combined heritage of over 150 years – have created a joint venture company called Wave Industries.

The agreement was signed at a private reception in London with Belarus Prime Minister Sergei Rumas, who has given his personal backing to the project to jointly produce electric buses and commercial vans.

The 300 Series electric bus will be launched at the Euro Bus Expo 2020 at the NEC in Birmingham in November and the production of an initial 300 vehicles will start in Coventry early next year which will reach up to 800 buses annually by 2025 when 600 jobs will have been created.

The two businesses are also collaborating on a hydrogen fuel cell powered electric delivery van which is due to be launched in the UK late next year.

West Midlands Mayor Andy Street – who has supported the joint venture – and Craig Humphrey, managing director of the Coventry and Warwickshire Local Enterprise Partnership (CWLEP) Growth Hub which has assisted CCA with its growth strategy, were also present.

The final negotiations were concluded during a Belarus-UK trade mission which included Thomas Ashton, Design Director at CCA, Craig Humphrey, Keith Budden, Head of Business Development at CENEX and David Wright, Director at Strategic Initiatives at Coventry University, who took part in the five-day visit to Minsk.

Mr Wheeler said the electric buses are ready for market and the hydrogen bus and van ‘proof of concept’ has been completed.
“Our aim is to be a world leader in the development and manufacture of fully integrated Zero Emissions vehicles and transport systems,” he said.
“We are bringing together the heritage, expertise, skills base and research and design excellence of our business with the proven electric vehicle technology experience of Belarus.
“As well as creating 600 new jobs, there will a tremendous amount of Intellectual Property Rights and Research and Design work included in the joint venture.
“We will export the electric vehicles to Commonwealth countries and talks are already underway to supply the electric buses to Egypt and Nigeria. We are actively seeking a UK retailer or logistics partner to collaborate with us in the development of the commercial van.
“We won’t just be bringing buses and vans to the UK but the complete design and installation of transport infrastructure systems.

Sergei Aleinik, Ambassador of the Republic of Belarus, said: “This is a great example of co-operation between the UK and Belarus by setting up a commercial entity of a joint venture for the production of electric vehicles. It is a clear commitment from both sides to implement Birmingham Declaration on zero emission vehicles, which was signed by the UK and Belarus in 2018.
“This project is strongly supported by the Belarus Government because of the mutual benefits it will create in terms of new jobs, advancing technologies and export opportunities. It is our joint valuable contribution to green growth concept in line with today’s global agenda.”

Business and Industry Minister Nadhim Zahawi said: “From electric buses to hydrogen-fuelled delivery vehicles, our modes of transport are getting cleaner and greener every day.
“This exciting new venture will drive forward low-carbon, cheaper ways to travel while creating 600 new jobs in the Midlands and growing our economy.”

Andy Street, the Mayor of the West Midlands, said: “From major production plants to research facilities, the West Midlands is the UK’s automotive heartland. And as we move towards state-of-the-art electric and autonomous technology, I want our region to become the global leader in this sector.
“I am therefore delighted to support this deal between Coventry’s CAD CAM and Belarus-based BKM Holding to open a new zero-emissions manufacturing plant right here in the West Midlands.”

Craig Humphrey, of the CWLEP Growth Hub, said: “Our region is at the forefront of delivering transport innovation with trials of connected autonomous vehicles delivering on the Government’s Future of Mobility Grand Challenge which aims to be at the forefront of delivering cleaner, safer, easier and more reliable future modes of transport.
“We are working with Wave Industries to identify a new site in the area to have the capacity to manufacture the electric buses as well as identify opportunities for the local supply chain to produce the different elements.

“It will be the first-time buses have been manufactured in Coventry since Daimler stopped its production in 1973 and this is extremely exciting news for our region and the UK.”